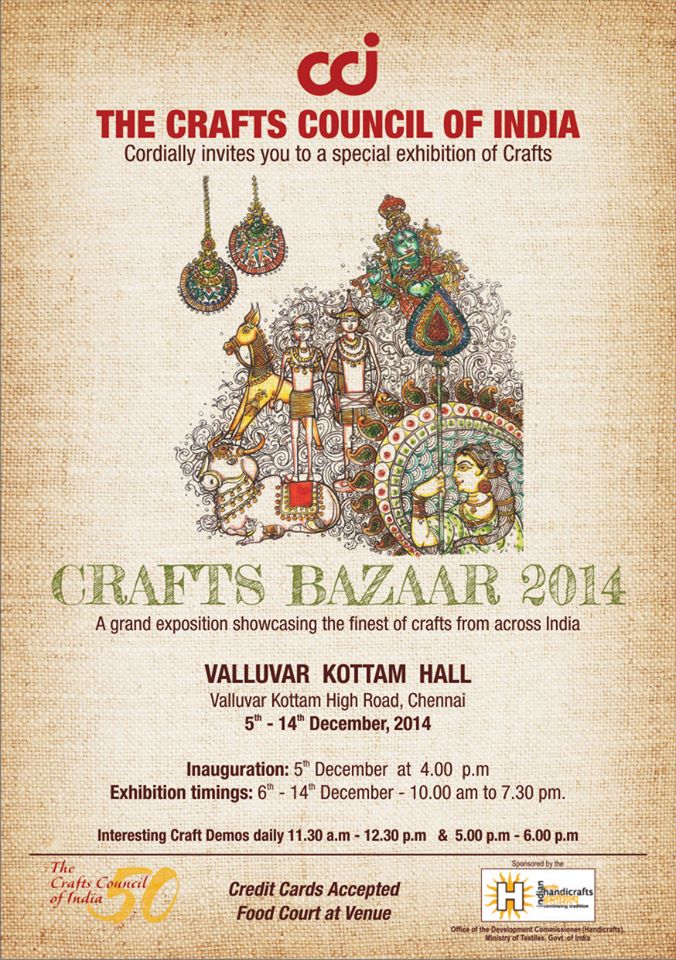 Crafts  Bazaar  2014, organised  by the Crafts Council of India brings the best of the country’s quality crafts together in what is one of the greatest  congregations of crafts, weaves and artisans under one roof. More than 115 craftspersons will display their products at the Bazaar in an explosion of creativity impeccable craft skills, exuberant colour and exciting innovation, literally creating a complete handmade eco sensitive and aesthetic lifestyle. Products on offer will range from bell metal utensils and tableware, decorative metal artware, Bidar artifacts and lacquerware products, tribal dhokra ware, leather puppet craft innovated to creative interior statements, kauna grass and sikki grass mats, mattresses, cushions and boxes, tribal iron craft from Bastar alongwith a wealth of handwoven saris from West Bengal, Andhra and Rajasthan. Traditional embroideries such as kantha, ari, kasuti, crewel, phulkari, Toda and chikankari will be on display, morphing saris, textiles and linen with the witchery of their stitches. Seven National Awardees and eleven State awardees will participate in Crafts Bazaar adding immensely to the quality dimension to the products on view.

Many rare crafts and weaves make a debut at the Crafts Bazaar 2014. Among them, the fabled ‘Aranmula’ mirror of Kerala which outshines today’s mercury mirrors, dhokraware and wood artefacts from Odisha, leather puppetry morphed into smart wall hangings, Begumpur cluster’s bright cottons and the vivid stylised lines of Madhubani  art on pretty tin boxes……

Since the process and rhythms of creativity of each craft are as culturally and ecologically significant as the craft itself, artisans will hold demonstrations of their craft at the venue. The wonder that is the Aranmula kannadi will come to life in artisan Gopa Kumar’s hands, also Raghunath Prasad’s whimsical wonder art of wooden birds while Gond artist Sambhaw Singh will paint the magical animals, figures and birds, the myth and mythology which makes up the Gond art. Mohd. Shafiuddin will demonstrate the delicate craft of bidri while cane and bamboo will morph into basketry, boxes and more at the hands of North Eastern artisan.

Crafts Bazaar 2014 is a much looked forward to event not just for the Chennai-ite but also for many NRI’s and foreign tourists who mark it in their travel calendar as not to be mixed dates.

Crafts Bazaar 2014 is sponsored by the Office of the Development Commissioner of Handicrafts, Ministry of Textiles, Government of India.